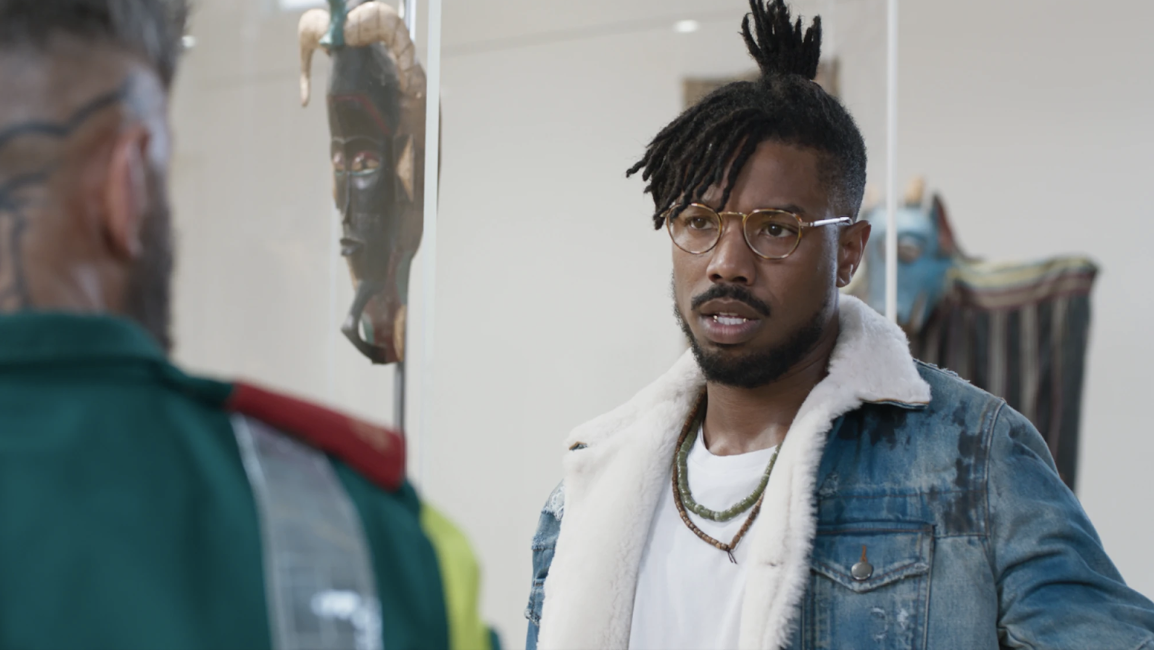 Since it’s Oscars season, we’ve decided to take a look at the entire decade of 2010 and some of its best dressed characters on the big screen. The 2010s were a big decade for all movie genres, so we’re bringing you characters from comedies, actions, thrillers and even a biopic.

10. Cliff Booth, Once Upon a Time in Hollywood

There’s something edgy about Cliff Booth’s style in Tarantino’s Once Upon a Time in Hollywood. It’s not just that he’s a stunt double with a troubled past. It’s his ability to throw on an old graphic shirt, Levis and aviators, without just looking like a 1960s time capsule. Even though the outfits stand on their own, Booth’s laid-back vibe and witty quips really tie it all together. He’s the ultimate proof that fashion is more than just the clothes, it’s a lifestyle.

We’re cheating a bit here since this character is based on a real person, played by that person’s son; however, Ice Cube’s fits in this 2015 biopic capture all the best trends of late 80s/early 90s hip hop, except the jheri curls. Between the baggy Dickies and dark colorway, we’re reminded of a simpler time in streetwear; a time when rappers brought their neighborhoods and upbringings into their outfits instead of simply opting for designer brands and flashy kicks.

Ryan Gosling’s role as Jacob Palmer in this 2011 rom-com looks as if he was created in an Esquire laboratory. His slim fit shirts, tasteful watches and unwavering ability to pick up girls any given night are all things we can aspire to. His makeover of Steve Carell’s character gives us all hope that we can all, in fact, “be better than the Gap.”

7. Chris Washington, Get Out

Chris Washington earns his role on this list not for flashy outfits or timeless trends, but just by the sheer casualness of his fits. We find his looks in the 2017 thriller to be the most universal, something we can all try. Whether it’s a gray tee under a chambray monk-collar or a faded polo over jeans, it looks clean and doesn’t take a lot of effort. Bonus points for his hobby of photography.

The James Bond type character has taken many forms in its franchise alone, but from it birthed a wide range of spy characters with one thing common: sharp dressing. Harry Hart stands out to us because of his emphasis on menswear in the Kingsman series. “Manners maketh man,” Hart famously quotes in the first movie. The sartorial nature of Hart’s first meeting with Eggsy is enough to make us all want to cop a pair of leather shoulder holsters and join the Kingsmen.

We know what you’re thinking, “when doesn’t Tom Hardy look cool in a movie?” Well, we narrowed it down to his fit in this post-apocalyptic sequel. Although his outfit may not be something you could pull off in your everyday, tuck it away in case of a nuclear apocalypse. You’ll be the best dressed wastelander. Also, you can copy the color scheme in a more tame outfit. If you can incorporate a light scarf into your fits like Hardy’s character, go for it.

Maybe the hairstyle isn’t for everyone, but Killmonger is one of those villains you kinda root for because they’re so badass. Between that artsy Oakland flair and the gold panther suit, Erik “Killmonger” manages to outmaneuver T’Challa at every turn stylistically. It’s that cocky walk and use of necklaces that turns a basic trucker jacket into something of awe.

Leonardo DiCaprio’s film adaptation of Jay Gatsby almost beat out his character from The Wolf of Wall Street for our list, but falls short on replicability. Luxury is really just an image. You don’t need the boat or cars or mansion. With Belfort’s outfits in the movie, from beginning to end, you’d believe he was always the wildly rich Wall Street king. It’s all about looking the part. His accessory choices of watches, glasses and shoes make something out of plain shirts and khakis. Not to mention that scene where he dons a pair of Cortezes. He’s got it all covered.

It was weird for all of us to see Jim Halpert take action against the attacks on a U.S. Consulate in 13 Hours: The Secret Soldiers of Benghazi. We also can’t deny how enviably rugged he looks in this role. Silva is the type of well-dressed, stoic protagonist you’d see in a Call of Duty game. He’s got the full beard, the great tan and the perfectly fitted shirts. Silva was an easy pick for our list.

Is it any surprise that our top spot goes to one of the most iconic characters of action movies since Neo, another one of Keanu Reeves’s creations. John Wick is a man on a mission, and it’s clear in his fashion choices. The guy is always clean cut in perfectly trimmed pieces. Even after a fight scene, beat up and covered in blood, Wick looks ready to be photographed in front of an explosion. He strikes this perfect balance between cold-hearted assassin and GQ centerfold. Unlike James Bond, Ethan Hunt, Jason Bourne and the like, Wick has an edginess to him which really stands out.