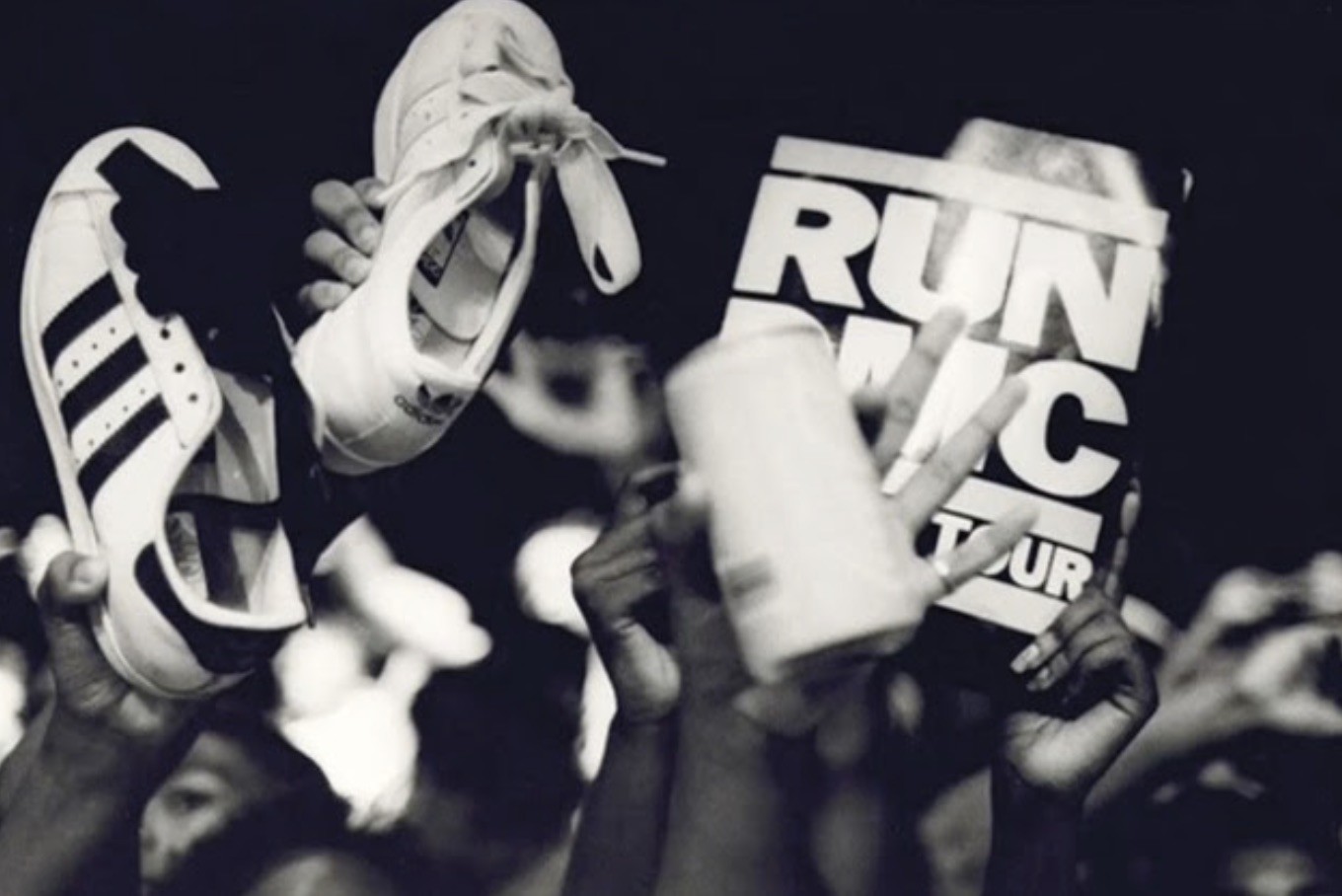 Hip Hop and streetwear are synopsis with one another these days . Throughout the years, Rappers have put their stamp on fashion by rocking luxury brands to creating their own clothing lines. Streetwear owes a lot to hip hop and some key moments that defined the culture. Here are a few artists that are not only known for their talent behind the mic, but for their influence on streetwear fashion.

Back in the day, Adidas sneakers were known as  basketball shoes, given out to players in the late 1960s’. The members of Run DMC wore their Adidas with no laces paired with black jeans, thick gold chains and goose down jackets. The trio were trying to evoke thoughts of the New York hustlers they came across growing up in the city.

The group decided to write the song “My Adidas”,  when they heard an activist in their city calling all people who wore Adidas “thugs”. They wanted to show that you can’t judge a book by its cover. This led to the first endorsement deal between hip hop and fashion.

An executive for Adidas decided to attend a Run DMC concert to see what all the hype was about. While he was there, Run told the crowd “Everybody in here, if you got Adidas hold em’ up!” The executive witnessed thousands of fans putting their sneakers in the air and he ended up signing a 1 million dollar endorsement deal with the hip hop legends. Adidas sneakers were no longer a thing of the past, this pushed the iconic shoe to become a staple of streetwear culture in the 80’s and beyond.

Since the early 2000’s, Pharrell has influenced and changed streetwear culture. While other hip hop artists were rocking baggy jeans and tees, Pharrell would show up on music video sets with trucker hats, shearling coats and skateboard branded clothing. He also had a huge affinity for custom made jewelry and Jacob the Jeweller would create lavish pieces for him. Nigo, the legendary creator of Bathing Ape(Bape), would ask Jacob to replicate those same pieces for him, but in different colors. Jacob told Pharrell the two should meet.

Pharrell ended up traveling to Japan and Nigo offered him a studio to work out of. Their meeting was a game changer to streetwear. Nigo helped him create the popular skateboard clothing brand Billionaire Boys Club and Pharrell came back to America wearing Bape every chance he got. This helped the already popular brand in Japan to become a legendary brand in the States. Pharrell was asked to put his stamp on Bape and designed bright colored and unique patterns for the brand.

With Pharrell’s help, Bape became iconic and other brands started noticing. Supreme began creating pieces with crazy designs and loud colors following the trend Pharrell put forward. This solidified the fact that Pharrell was not just a hip hop artist who loved skateboarding, but a bona fide fashion designer. In 2015, Pharrell was awarded the Fashion Icon Award by the Council of Fashion Designers in America.  After countless collaborations with brands such as Reebok and Adidas to the creation of Human Made, who knows what streetwear would be without Pharrell. Williams.

First came the shutter shades then came a fashion icon. You cannot deny Kanye West’s influence on streetwear. From wearing a Celine blouse on stage at Coachella and showing that gender fluidity was part of streetwear culture to making “dad” shoes cool with the introduction of the Yeezy 700 “Waverunner”, Kanye is a trend setter. He does not only influence, he creates the next trend for all streetwear enthusiasts and hypebeasts. One of the biggest trends Kanye started was creating hype for sneakers other than Jordans.

In 2007, Kanye found himself on a plane with Nike CEO Mark Parker. The confidence he gained from creating a shoe for Bathing Ape, pushed him to sketch a sneaker in front of Mark. Immediately, the CEO knew he had to sign Kanye to a deal. The Air Yeezys were born and instantaneously became the most coveted sneaker at the time.

In 2012, Kanye West was no longer satisfied with the deal he had with Nike. Adidas caught wind of this and in 2013, he struck up a new deal with the sportswear company. This is where the Yeezy “350” came into play and an entire clothing line dedicated to Kanye’s vision. All of sudden Jordans weren’t the only shoe drops sneakerheads would wait in line for. Hypebeasts found themselves dropping $400 for a pair of Yeezys without batting an eye.

Say what you want about Kanye, but without him streetwear would not have evolved to what it is today.Kanye rocked shutter shades and all of a sudden you saw the ridiculous styled glasses in every shop. On his “Walk the Throne” tour, Kanye wore a leather kilt and paved the way for artists like Jayden Smith and ASAP Rocky to show off their androgynous fashion without criticism. He created a sneaker line that people compare to the coveted Nike Jordans. Kanye West imagined what streetwear could be and then created it.